Our next meeting will be our Christmas lunch at Owen's restaurant in Ramsbottom.  Unfortunately if you have not already booked it is too late to do so but we hope you might be able to join us in January.  In the meantime best wishes for the festive season.

On 8 November we had an excellent presentation on the work of Samaritans and how it was started by Chad Varah.  Chris and Isobel made the talk not only interesting but extremely enjoyable with their presentation style.  We learnt a lot about the organisation and the fantastic work they do.

Dr Rudralingam talked to the group about graft versus host disease which can happen if people receive donor stem cells. She also explained about possible necrosis of the jaw which can happen following invasive dental treatment if people have been on biphosphonates, including Pamidronate, Zometa and Denusomab.  She stressed the importance of telling the dentist if you have taken these drugs.  She also advised how best to keep a healthy mouth.

We had an excellent presentation by Alan Redfern about Blood Bikes who out of hours transport not only blood but other essential items to hospitals hospices and even to people's homes.  We had 18 attendees and  was good to see so many people at the meeting.

We had 14 members attend our first face to face meeting since February 2020!  Rachel was very knowledgeable and gave us a lot of information on the work of the pharmacy, how the drugs are made up and the potential side effects which is not the same as an allergy.

Suzanna explained that Maggies Centres were started by a woman who had a bad experience of being given a diagnosis of cancer.  With the help of her husband who was an architect she laid down a blue print for Maggies Centres which should be a welcoming place.  The first Maggies Centre was in Edinburgh but there are now 24 Centres.  They are totally funded by the charity.  They aim to provide emotional, practical and psychological support.  At the Oldham centre they hold exercise classes, provide benefit advice and run courses such as mindfulness and living with stress.  After explaining about the services, Suzanna Bland led a relaxation session. She spoke of woods, walks, fields and water and played very relaxing music alongside her talk, which I thought she did very well.  As I looked around the pictures of the members several of them appeared to be falling asleep.

We had an interesting talk from Sibby about the fight for votes for women and learnt about the difference between Suffragists and Suffragettes.  Manchester played a significant role in obtaining votes for women.  Whilst we were behind many countries in this respect we were not as bad as Switzerland where women got the vote in 1971!

Ellen gave us a presentation on what work  the Myeloma Infoline had been doing during the pandemic.  She then talked through tips to living well with myeloma and then answered questions from the group.  We were delighted to see that more people have been able to join the Zoom calls and this was our biggest attendance to date.

We are delighted to say that we have been successful in obtaining a grant from the Lottery Community Fund of £922.  This will pay for our meetings when we can get back together and for our website fees.

We held our AGM on Monday 18 January via Zoom.  There were 19 members in attendance.  We reviewed the year and looked at the results of our questionnaire that was completed at end of 2019.  The latter showed the group was well appreciated.  The current committee were re-elected.  Then there was a short general knowledge quiz - three teams tied for first place.  Afterwards there was time for a chat.

Unfortunately this year as we were unable to have our Christmas lunch together we had a social meeting via Zoom on Monday 14 December  There was an opportunity to chat and we had a Christmas based quiz.  Congratulations to Christine and Richard McLeod for winning although alas no prizes this year!

We were due to have a meeting on 3 November but alas technical problems meant many could not log on. Somewhat ironic given the topic! So this was postponed until 18 November when Susana Castro from Healthy Minds joined us to discuss causes of stress and how best to deal with it.  Susana engaged with every member of the group so that they were able to share their experiences.

Like many people we have started to meet on Zoom as we cannot meet in person.  Our first meeting in June was an opportunity to catch up on how people were coping and what they were doing during lockdown.

Our second meeting in July we were joined by Susana Castro from Healthy Minds who took us through a progressive muscular relaxation method.  It certainly was relaxing and many felt ready to sleep afterwards!

At our meeting on Monday 17 August we were delighted to be joined by Chris Martin from Myeloma UK.  In early September we held another meeting to give us an opportunity to update each other on our treatment.

In September we were joined by Dr Cavet, Consutant Haematologist at Christie Hospital.  Dr Cavet explained briefly what myeloma is and current and developing treatments as well as how COVID has affected these.  He was briliant at answering questions from the group.

Sarah Horne, a volunteer with North West Air Ambulance gave us a lively and interesting talk on their work.  Perhaps surprising the £9.5 million that it costs to run the service is all funded by donations and there is no government funding.  She outlined the skill levels of the service, both pilots, doctors and paramedics.  She showed pictures of the tight spots where the helicopter had landed.  She also highlighted through case studies the difference this service made to people's lives.

There was a good attendance at the AGM with 23 members there.  It was noted that the group's finances were still healthy for this year but we would need to seek funding for future years.  At the meeting we appointed a new Chair, Christine Hacking, but are delighted that Stephanie will remain on the committee.  Also Martyn Warburton has joined the committee.  After the business part there followed a team quiz which was won by Ron, Linda, Alan and Karen.

31 members of the support group enjoyed Christmas Lunch at Owen's restaurant in Ramsbottom on 9 December.  It was excellent food and efficient service and great to see such a vibrant group.

Russ gave us an entertaining and educational talk about the Galapagos Islands.  This was beatifully illustrated by photography and film.  The group enjoyed him so much we may invite him back to talk about a different topic next year.

Chris talked to the group about Mindfulness and explained the principles behind it as well as giving the group three short experiences of it.  The group found the process very relaxing and soothing and we all felt quite chilled by the end of it.  Chris also gave us the names of suitable sources and these will be in the next newsletter.

Visit to the Pathology Laboratory

Eighteen members of the group visited Royal Oldam Hospital Pathology Laboratory to see what happens to the various samples. The staff were brilliant in showing us round and we visited Haematology, Microbiology and Biochemistry departments. They explained how the samples were tested was explained as well as how treatments could be devised following the results.  Everyone who came found it fascinating.

At the last meeting Dr Rocci talked about new and developing treatments for Myeloma and the eligibility criteria for these treatments. He explained that treatments were allowed based on scientific, poltical and financial considerations. He also talked abot side effects and said you should always inform your doctor about these as it may be possible to reduce the dose of the drug to mitigate these.  As before Dr Rocci was brilliant at answering questions and explaining things in layman's terms.

Claire kindly stepped into the breach when our speaker was no longer able to come due to a family bereavement.  Claire outlined both the large sum that Myeloma UK needed to raise each year as it receives no government fnding.  She also highlighted the way it spends this money and the large amount that goeso n research.

We had a lovely trip in the Open Top bus tour.  Despite very variable weather in June thesun shone on us that day and 17 members of the group were able to enjoy the day. even those who had lived in the area all their lives learnt something new.

We welcomed Sibby back to the group as previously she had talked about another aspect of local history.  This time the topic was Workhouses and Asylums.  It was extremely interesting if somewhat depressing part of our history.  We were srprised to learn of the extent of the system.

24 members of the group enjoyed afternnon tea at Summerseat Garden Centre on 13 May.  We were lucky and it was a glorious warm sunny day which made it all the more pleasant.

Linda gave us an interesting talk on the benefits of reflexology and in particular the relaxing effects of the treatment.  She also showed us how to do reflexology on ourselves on our hands

Dr Ridley, Head of Research at Myeloma UK gave a talk to the group on clinical trials.  He explained the process very clearly and how very few actually become approved treatments.  He also highlighted the clinical trials currently being undertaken in the North West of England.

Claire gave us an overview of MaggiesCentre in Oldham which is open to anyone affected by cancer.  There are no referrals, you just drop in.  There is also a timetable of events, e.g.mindfulness and you can contact Maggies for details.

On Referendum Day 23 June the group enjoyed a trip on East Lancashire Railway.  We all travelled on the steam train with freedom of the line tickets and enjoyed a glorious summer's day. 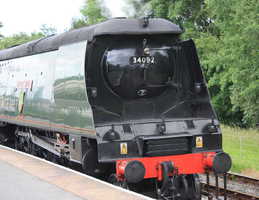 The trip to Manchester recycling centre on 1 June has been cancelled as the numbers were so low.  It is hooped this can be rearranged in the future.

We have learnt today that we have been awarded a grant of £1000 from Sport Relief Community Cash.  The money is to help raise awareness of the group.

Thanks to everyone who sponsored us as we have raised over £650 for Myeloma UK.

We are located at:

Get social with us.