West Pennine Myeloma Support Group is run by a team of volunteers.  Our committee members are detailed below. 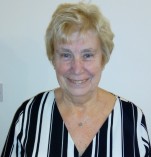 Christine lives with her husband Chris in Littleborough.  They moved to a bungalow in 2019 after 48 years of living in Royton -  a huge change!  Christine is a carer for Chris who was diagnosed with myeloma in 2017. Originally he was diagnosed with carpal tunnel syndrome then after an MRI scan he was admitted to Salford Royal Hospital and had two serious operations.  Apparently he could have been paralyed at any time and we had no idea!  After chemotherapy and a stem cell transplant in January 2018 Chris is now in remission.

Christine has three daughters and seven grandchildren whose ages range from 5 years to 18 years and are a source of love and delight.

Over the past few years their lives have changed dramatically so it is difficult to fit in any hobbies as such but Christine loves listening to Classic FM and just loves watching 'Vera' on TV. She loves being with the family, playing with the grandchildren gardening and flower arranging.  She enjoys meeting up with friends for coffee and cake.  She has also managed to keep up with her charity volunteer work with the Red Cross where she has been helping out at their Royton shop for over 16 years.

Before retiring Christine was the administrator for a bereavement support counselling service. Her Christian faith defines her as a person and goes hand in hand in her life guiding, encouraging and supporting her life.

The Support Group has a special place in her life.  Chris and she discovered it over four years ago and is place to meet up with like-minded people where we don't have to explain or clarify 'Myeloma'. She says 'I realise the importance of the group and will do my utmost to carry out this important work'. 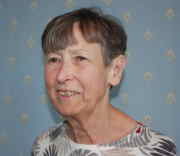 Joan was diagnosed with myeloma in 2006.  At the time she was working as a GP Practice Manager.  One morning she sneezed and hurt her back and later it transpired that she had collapsed two vertebrae.

Joan has had considerable experience as a manager in both healthcare and at a University and enjoys bringing her organisational skills to the group.

Joan underwent a stem cell transplant in 2007 and has been fortunate to have been in remission ever since.  Unfortunately the myeloma damaged her kidneys and she has been on dialysis since 2008.  However this is peritoneal dialysis and is done at home overnight so has not stopped her from doing things.

Joan enjoys reading and indeed studying and is currently learning Spanish.  She also likes the theatre and regularly goes to plays, concerts and ballet.  She enjoys cooking and entertaining. In addition she practices tai chi and zumba.  Finally she loves to travel and despite the dialysis manages to go on European holidays on a regular basis except during covid..